Volunteering in Palermo with H.R.Y.O. 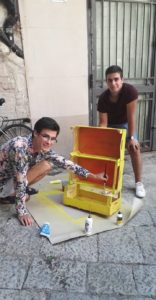 From July 4 to August 30 I was a volunteer at the Human Rights Youth Organization in Palermo. It was an intense
time that brought me many challenges and constantly pulled me out of my comfort zone. HRYO is a relatively large
organization that always hosts several volunteers as part of European projects. The organization focuses mainly on
popularizing human rights, working with the local community, especially children and youth at risk of economic
exclusion and mafia influences. Mafia still seems to have an impact on the lives of Sicilians. Many things are impossible
or difficult to do for them, even if they are seemingly simple tasks and problems to solve. It was the differences in
mentality and cultures that caused the greatest difficulties for me at first. 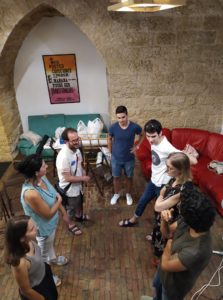 As part of the project, I had the opportunity to conduct #letstalkHumanRights meetings with migrants from the
local social club – Ikenga. We also organized English Language Café meetings to jointly learn English, which is extremely
needed in Sicily. Although my project is short-term, I had to learn many words in Italian to communicate with the people
of Palermo in their daily activities. English Language Cafés allows their participants to tame English.
Our colleague Melania working at HRYO on July 15-19 held meetings raising the subject of stereotypes about
gender issues and violence. Although most of us had similar insights, the conversation was extremely important. As part
of the project, we watched a shocking documentary about the female body on Italian television programs. It was very
important to us and left many questions.
From July 29 to July 31, together with scout groups from northern Italy, we cleaned the Terra Franca area. This
is an area confiscated from the Mafia and commissioned a few months ago by HRYO. Ultimately, it is to be a place of a
social garden, where the charges of the organization dealing with youth and young adults from the autism spectrum will
also work.
On August 11-14, we were in Alcamo at the Alcart Festival. As part of the cooperation with the organizers, we
ran an organization stand where we sold materials promoting human rights made by the local artist Monica Dengo, we
presented the #HumanRightsRightHumans exhibition and talked with festival participants and residents of Alcamo as
well as tourists about human rights, our countries, democracy and European community. 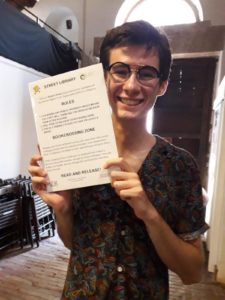 The last project that I implemented was the creation of a street library in which, as part of the international
bookcrossing movement, people can exchange books by introducing and extracting them from circulation.
It was sad to me Palermo has a big plastic waste problem. The ecological and environmental awareness
of citizens is low. As part of private conversations, volunteers tried to convince residents to change their habits.
Disposable plastic is distributed everywhere without much thoughts. When we organized a party for volunteers and
interns of other organizations, the most surprised by the lack of plastic cups, which come here at every party were
Italians. The big issue for me was also the frequent use of fireworks. They are here almost every day. Official local shows
lasted over an hour. Although many of us like to look at the color holidays in the sky in Poland, there is quite a lot of
public awareness about the dangers of fireworks. In Italy, this does not cause opposition or outrage yet.
From a perspective of time spent in Palermo, Sicily seems to me African in many aspects. People are different.
More friendly and open, but also much more focused on reputation. They approach the world around them and the

problems they have to deal with differently than I was learned. I regret that my project was largely carried out in
August. It is a month when the city is operating more slowly. Nevertheless, Palermo is worth exploring and there is a lot
of work to be done here still. At the same time, residents are very open to action. However, they need a spark that can
start them. During the time spent in Sicily, I met many wonderful people. This experience changed me forever, made me
aware of my values and showed me many truths.