[:en]Massimo Milano with Quir: a success story enhanced by the project Pandora[:] 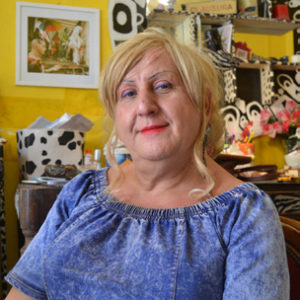 Massimo and Gino represent much more than founders of a boutique. Massimo originally from Rome, and Gino from Milan, they have been an LGBTI couple for 40 years now, and together they decided to found Quir in Palermo 25 years ago, in the historical district of Ballarò. Quir specializes in the manufacturing of leather products, such as bags, belts, and wallets, handmade by its founders, who are now a symbol not only of a successful entrepreneurial story, but also of sexual freedom and human rights. “Palermo did not use to be as open-minded as today. 25 years ago, when we first moved here from Rome to open up the boutique, you could hardly see any LGBT around. We were the only ones and we had to overcome many cultural and social barriers, in addition to the economic issues of running a new business”, says Massimo inside Quir. She is President of the campaign Palermo Pride, an Advocacy Programme aimed at raising awareness about the rights of LGBTI people, and together with y she founded ARCI gay back in 1981, the very first association in Italy formed to represent the LGBTI community. “Prior to us, there was no formal association in Italy for the LGBTI community. We quickly became a reference point for many people who felt like they were living at the margins of society. Here they could be listened to, and we could all be ourselves”, she explains.
“You have to bear in mind that we started this peaceful battle when no one else in Palermo even knew what not being heterosexual meant. Civil unions between LGBTIs only became legal in 2016 in this country. People come to Quir to buy leather products of course, but there is much more to it than shopping. There is a sense of belonging and community based on these long-term battles”, Massimo proudly tells me. She remembers facing many difficulties with their business at the beginning.

“For a long time we had practically no clients at all. Only recently we can say that local people here have accepted us into their community. Although I should say that I don’t like the term “accept” because being LGBTI is something natural and in that sense I don’t feel it should need to be accepted.”, she continues. When we ask her what advice she would give to women interested in opening up their own businesses she stresses how things have become much harder today because of high rates of unemployment. In addition, she thinks that women face a double barrier: One due to the general levels of unemployment faced by all young people today and the other due to gender discrimination at work and in society. “You need to be strong and determined, because as a woman you will always need to fight more than men in order to get what you want and what you are entitled to. The one advise I feel like sharing, is to always try to be creative. Creativity is what saved Gino and me, and of course Quir. Only if you are creative, you can truly be free to choose in life.”, she concludes.