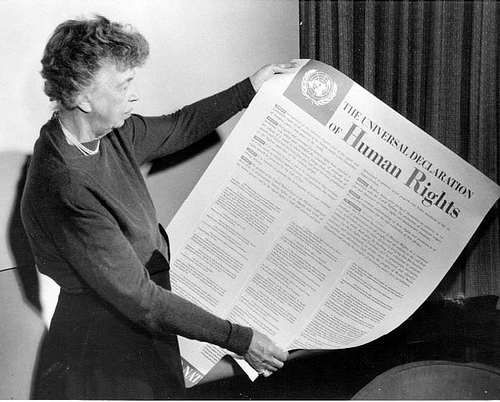 What Are Human Rights?

If I will simply ask, what do you understand by “human rights” could I hear an direct answer or would you need time to find the exact definition? After an interview many people were unable to give a clear response, and in cases they did,the sound of voice felt full of doubts and uncertainty of their explanation in own words and beliefs.

Human rights on a very basic level are the rights you have simply because you’re human. Human rights can generally be defined as those rights that are inert to our nature, without which we cannot live as human beings. That’s the rights that we are born with and are unalienable.

Human rights are applying to absolutely everyone everywhere, certain groups and individuals, they are simply universal rights. That’s thefundamental rights we have and were created to protect us, that allow everyone freely to choose who we want to become or do in our lives.  Recognition of the dignity and equal treatment of the humans is the foundation of freedom, justice and peace in the world.

Most of the people know their basic rights as the right to live, to choose the religion, to have a safe place to live, be paid for the jobs they are doing, but there is more other rights that need to be known in order to prevent slavery, intolerance and discrimination.

On 10 December 1948 in Paris, the General Assembly of U.N. adopted and proclaimed the Universal Declaration of Human Rights. It is the event that led to the overthrow of the old regime of the absolute monarchy and the establishment of a new political and social order in the French state, with major consequences, not just on it, but on the whole of Europe.

The declaration of Human and Citizen rights is one of the first and most influential acts drafted during the French Revolution. It is a fundamental document in the development of modern democracy, putting its mark on modern constitutional regimes. Influenced by the enlightened ideas and various statements, especially American, is the act that has devoted the concept of fundamental rights and freedoms.

After this significant act, the general Meeting of the Member States does not spare any of the means at their disposal to solemnly publish the text of the Declaration and, in order to do so that it is distribute, displayed, read and commented, in Educational institutions, no matter of the political status of countries or territories.

The Universal Declaration of Human Rights (UDHR) is a landmark document in the history of human rights, elaborated by representatives with different legal and cultural backgrounds from all regions of the world translated in 500 languages, it contains a preamble and 30 articles. It circumscribes numerous rights as civil, political, economic, cultural and social to which people all over the world are entitled.

“This Universal Declaration of Human Rights, as the common ideal to which all peoples and nations must strive”, so that all persons and all the organs of society attempt, having this permanent statement in mind, that by learning and education to develop respect for these rights and freedoms.