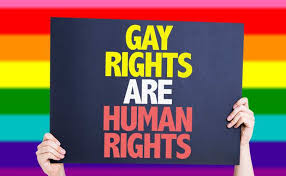 The LGBT+ movement is one of the most powerful activist movements of the modern world. Its purposes are clear: Lesbians, gays, bisexuals, transsexuals and other sexual minorities( LGBT+) should be accepted by society and state, saved from prosecution and discrimination and be given the same rights when it comes to the family and partnership as straight couples.

The discussion between members and supporters of the LGBT+ movement and its opposition haven’t changed much over the course of the past years. Freedom against tradition is what we are usually talking about. One side says that we cannot chose who we are, but we can make the best out of it, while the other side choses to say that homosexuality is indeed something unnatural that we decide to be and shouldn’t, since it contradicts all the rules that we have been dictated for thousands of years which don’t allow us to leave the traditional image of sexuality and of sexual identity of a human being.

It is hard to find a compromise in all of this, especially since the opinions about LGBT+ rights generally vary between the extremes.

In Europe, the LGBT+ movement has a long tradition: already in the 19th century, psychiatrists and doctors started doing research on homosexuality and applied the, until then, condemned sexual practice to a social personage and scientifically classified it. In the mid- 19th century, the term “homosexual” was invented (first in German: “Homosexuell”) and coined in reference to the German lawyer, Karl Heinrich Ulrichs, who is often considered to be the first gay-rights-activist. By the end of the 19th century, many European countries had decriminalised homosexual acts.

Unfortunately, over the course of the 20th century, countries that were under dictatorship, such as Soviet Russia, Nazi Germany or Franco’s Spain punished homosexuality harshly, during WWII, the only safe Island for many sexual minorities in Europe was Switzerland, where they could, unaffected by the war, continue to live without fearing prosecution.

After 1945, new activist groups formed in the democratic European countries and the sexual liberation of the 60s and 70s made the LGBT+ movement bloom. This was also the time when the rainbow flag was invented and homosexual activism, which bloomed parallel to feminism, started to include lesbians as well as gays.

In the 80s and 90s, activist groups formed in the rest of Europe, finding their peek after the end of communism and dictatorships in Eastern Europe. Today, all European countries have Pride Parades and very active groups who promote the equality LGBT+. The level of acceptance, both by law and by society, varies immensely. There are countries, when LGBT+ members can marry and adopt children without great problems, and there are countries where LGBT+ members have to keep their identities secret.

But what has all of this to do with human rights?

Even though the Universal Declaration on Human Rights is very clear about the protection of LGBT+ members worldwide, practice of homosexuality is under death penalty in 7 countries, criminalised in 50 and in 50 more only for men. Discrimination of LGBT+ can include human rights abuses such as: the violation of the rights of the child, infliction of torture and cruel, inhuman and degrading treatment, arbitrary detention on grounds of identity or beliefs, restriction of freedom of association and denial of basic rights of due process. Even in states where being LGBT+ are not prosecuted and anti-discrimination laws are enforced, its members often have to face challenges, they are very often denied employment, housing or health services, lose custody of their children, get denied asylum and very often become victims of verbal and physical abuse and get threatened. In many countries, non- heterosexual couples have no right to find a family on a legal base. This is contradicting Article 16 of the Universal Declaration on Human Rights, which defines the right to marriage as a fundamental right for both men and women.

To establish some international principles on how to treat homosexuals and transsexuals, the Yogyakarta Principles on the Application of International Human Rights Law in Relation to Sexual Orientation And Gender Identity were established in November 2006, enforcing the application of human rights in connection with the gender and define sexual orientation as “each person’s capacity for profound emotional, affectional and sexual attraction to and intimate sexual relations with individuals of a different gender or the same gender or more than one gender”. With the establishment of these principles, each individual around the world is given the possibility to define their sexuality and gender identity freely. Each established principle about said freedom is a duty of each state to implement and to protect.

The European Union is at the forefront of fighting for the equality of LGBT+, their rights are associated with human rights, which is a fundamental European contribution. According to Article 8 of the European Convention on Human Rights, each individual’s privacy is defined as an autonomous zone of liberty, each and every one of us can do in their private life what they want to do, as long as we do not harm anyone else. This way, not only LGBT+, but everyone is legally protected from being prosecuted by the state for their preferences, hobbies and other activities that are connected to their private life.

Despite all of these legal protections, many members of sexual minorities see themselves frequently confronted with verbal and physical harassment and discrimination. Many EU member states do not accept LGBT+ equality and do not guarantee the same rights that should be guaranteed according to the principles of Human rights, including the right to get married. Currently, same-sex couples can only get married in 11 European countries and form civil unions in 9. In Italy, civil unions for gay and lesbian couples have only been legalised in May 2016. Italy is the 27th country in Europe to legally recognise same- sex couples, even though the Cirinnà- law does not give civil unions an equal value in terms of value of the registered relationship, the right to adopt step-children, the requirement to be faithful and the process of dissolving the union. Partners of a civil union are not given names such as “spouse”, ”wife” or “husband”, therefore, the law fails to give official terms to the partnership. Otherwise, inheritance, other financial obligations, the adoption of each other’s surname and visiting their spouse in the hospital, same- sex couples have the same rights and obligations as couples of opposite sexes.

The public opinion about LGBT+ rights and same-sex marriages varies widely and is in many cases strongly influenced by the opinion of the Catholic Church.  In 2013, Ivan Scalfratto of the Democratic Party proposed a law for the protection of LGBT+ against verbal abuses that was highly opposed and said to be restricting freedom of expression and focusing on LGBT+ only and to be limiting the expression of groups advertising heterosexual marriages. The law was approved, after the adoption of some changes, and is criticised both by LGBT+ supporters and opposers. LGBT+ supporters criticise the bill for making certain offences no longer punishable, such as propaganda activities promoting homophobic and transphobic ideas and the instigation of violence against homosexuals and transsexuals. The anti- discrimination bill is said to have shifted the focus of the needs of a minority to the interests of a majority.